I am finally finished the Latvian Socks. I feel a sense of relief at having these done, not a hard pattern but on 2mm needles I seemed to knit and knit and get nowhere with these. But I am really pleased with them, they were well worth the effort. 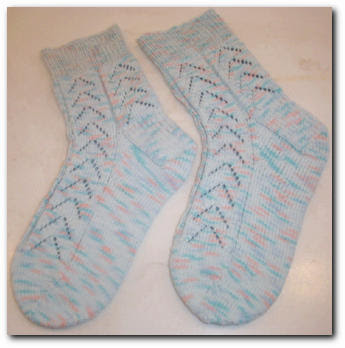 Pattern: Latvian Socks from "Folk Socks" by Nancy Bush
Yarn/Needles: Fortissima Coton Colori Shade Santa Barbara, US #0
Notes: I knit a rib instead of the picot edge, and I cast on with 72 sts instead of decreasing down to 72, rest of sock was knit per instructions.
Heel/Gusset/Toe Notes: Heel and Gusset were knit with my usual method, I did however, learn a new method for the chain selvedge. All my life I have used the slip the first stitch method and this method created the same finished edge but was done by slipping the last stitch p-wise, then ktb the first stitch. Toe is the same as the Conwy toe and I am now used to it. And after wearing the Conwys quite a bit now, I like the way it fits too.

Also did some quick knitting and made a cabled scarf. 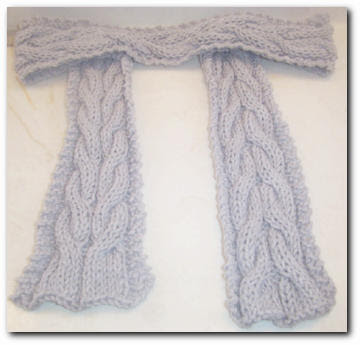 Pattern: Karaoke Cable Scarf from Knit Pixie
Yarn/Needles: vintage Mary Maxim Chunky wool blend. 8mm needles
Notes: I really like this pattern, very simple, but the cables create a neat effect looking like a more complicated cable, rather than two simple cables side by side.

Now that the Latvians are done, I will buckle down and get some serious work done on the Gotland Island Mitts. I am currently working a few more pattern repeats then I start the finger shaping.
Posted by Unknown at 12:23 p.m.

Great socks! Need to check the library for that one :d